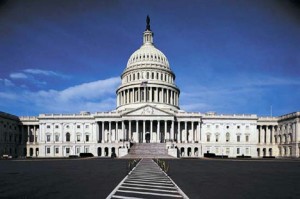 The extent of my experience with getting food allergy legislation introduced pertains to guidelines for Colorado food allergic schoolchildren. There are still many opportunities to get legislation passed in your state, even though every state has passed legislation allowing students to carry epinephrine and to carry inhalers at school. A few states have begun to pass legislation requiring restaurants to be food allergy aware. Taking on any of these food allergy causes will teach you an abundance about our legislative system, and more importantly it will benefit thousands of food allergic students.

My experience with legislation in Colorado

In the summer of 2007, I met with Senator Dave Schultheis, my Colorado Senator, to present to him the idea of a bill in the Colorado Senate requiring Colorado school districts to have a policy to keep food allergic students safe. He was very polite, however declined to use one of the 5 bills that he’s allowed to introduce each year to propose this legislation.

Not being one to give up easily, I decided to continue to pursue other Colorado legislators. I met with one of our local Representatives who has a son with severe food allergies. She was interested in the legislation, but again wasn’t willing to sponsor it herself. She asked me to track how well our local school districts’ food allergy guidelines, which were recently implemented, were serving the students and to get back to her.

At the end of the summer in 2007, I made presentations to food allergy support groups in Denver and in Colorado Springs about the idea of food allergy guidelines for all Colorado students. One of the Moms in attendance chairs the Food Allergy & Anaphylaxis Network (FAAN) Walk for a Cure and had been instrumental in the 2005 legislation allowing Colorado students to self-carry EpiPens and Inhalers at school. She had worked with Senator Paula Sandoval from Denver on that legislation and asked if I’d like to have a meeting set up with the Senator and her. I jumped at that chance!

I created a binder of information about food allergies for the Senator. I also copied every piece of legislation on food allergy guidelines in every other US state for her to review. At that time, only a few states had passed such legislation and several others had the legislation in front of their Senate or House. I wanted her to know that Colorado wouldn’t be the first state to consider such legislation. She was very interested in pursuing the legislation as a sponsor, and she had a keen interest in the topic because her grandson has severe peanut allergies.

The Colorado legislative year runs from January through May and each Senator is allowed to introduce/sponsor 5 bills a year. Senator Sandoval already had her quota of bills for the 2008 legislative year, so during 2008 I continued to maintain contact with her sending her e-mail updates about other states passing or introducing similar legislation. In the fall of 2008, Senator Sandoval called me to say that she would be sponsoring the legislation in the 2009 legislative year. What a thrill that was!

The drafting of the legislation was completed by Senator Sandoval with help from a couple of allergists in the state. She then sent the draft legislation to me and several others to obtain comments. I forwarded the legislation on to Chris Weiss of the FAAN and to Robert Pacenza of the Food Allergy Initiative (FAI). Chris was able to provide updated facts about the prevalence of food allergies, and Robert gave us suggestions for changing the wording of the legislation to ensure its passage. He had participated in the process of getting legislation passed in New Jersey and New York and knew what the sticking points were in their legislation. We needed to define whether ALL school would be covered, or just public schools. And what about charter schools? In the end, Senator Sandoval included all public schools and charter schools, and left out private schools entirely.

Senator Sandoval had a legislative broker assigned to this legislation, and she was our contact during the entire process. She helped people refine their testimony to hit upon the key elements in the legislation. She also gathered information to create a fact sheet about food allergies for all the Senators to read. Additionally, she obtained a letter signed by the President of the Colorado Allergy & Asthma Society giving the support of all 60 members of Board Certified Physicians in Allergy/Immunology.

Testifying in the Colorado Senate and House of Representatives

My son, Morgan, had the opportunity to testify for the bill, SB09-226 “Concerning Policies for the Management of Food Allergies among School Children” the last week of February 2009.

After testimony in the Senate Health & Human Services Committee, the bill passed by a vote of 8-0. Senator Schultheis, the Senator I had met in 2007 to ask to sponsor the legislation, told the audience prior to his vote that he was intending to vote “No” on the legislation until he heard the compelling testimony of parents and Morgan. He realized that there were many other food allergic children across the state whose parents were trying to keep them safe at school each day! That is a victory, especially since this particular Senator is renowned for voting “No” on virtually every piece of legislation, and because he wasn’t willing to sponsor the legislation in the first place!

Hundreds of parents, doctors, school administrators and staff across Colorado e-mailed and called the Senators on the committee prior to the hearing encouraging their support. 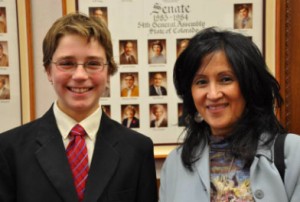 In April 2009 Morgan went back up to Denver to our state capitol to testify. This time, the bill was going through the House’s Committee on Education. Morgan used his same testimony with some altered sentences and added in some words because “Mom” didn’t testify this time. Representative Gagliardi sponsored the bill in the House. The process of getting the bill through the Committee took about 2 hours. It passed 10-3. 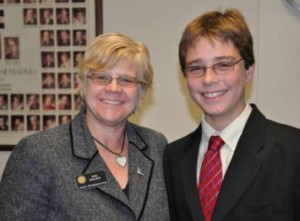 There were some amendments added to the bill in the House that required the legislation to go back through the Senate for re-approval. Senator Sandoval was adamant about getting something passed, and was willing to work with those House members who wanted for all the 178 school districts in Colorado to develop their own policies, rather than have a state mandated policy. The compromise between the Senate and the House yielded a minimum standard policy, but allowed school districts to develop a policy beyond that.

Then, in honor of Food Allergy Awareness Week in May 2009, Governor Ritter signed Senate bill 226, requiring all 178 Colorado school districts to develop and implement a policy for food allergic students. Click here to view the final Act.

The signing was done in a private ceremony in the Governor’s office with Senator Sandoval, the bill’s sponsor, in attendance along with several food allergic families who were instrumental in testifying in support of the bill as it made its way through the Colorado House and Senate. 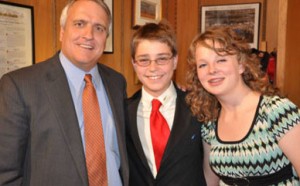 It is a lot of work, but certainly worth the effort. If you’re interested in starting legislation in your state, feel free to contact Nicole Smith at Nicole@AllergicChild.com for any assistance.