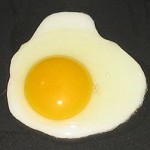 Egg allergy is another common early childhood allergy along with milk. Doctors suggest not giving children eggs until they are at least one year old. We didn’t realize that my son had an egg allergy until he received his MMR shot at 15 months old, which at that time was an egg-based shot. After he swelled with hives for 3 days, we had a good indication he had an egg allergy!

At his first allergy testing at 18 months old, he scored high on the skin prick test for an egg allergy. Two years later, when the test was repeated, he scored a zero. However, today when he eats products with eggs he does get flare ups of his eczema. So I’m not sure the egg allergy has completely disappeared yet, even with the -0- skin prick score.

Upon his 5th birthday, when he would have received an MMR booster, we decided to take the precautionary route. We went to the allergist’s office and had him allergy tested with skin pricks with the MMR shot. Slowly the amount of the MMR shot was increased from a skin scratch to a skin prick to a shot. It took most of the day for him to receive the shot, but it was worth it to ensure his safety. And he had no reaction this time.

A visitor to AllergicChild.com wrote about her experience with an egg allergic son. When her son had to have a surgery, the anesthesiologist recommended a gas anesthetic rather than a liquid IV because the liquid contained albumin – an egg derivative.

Also, be mindful of flu shots that are all egg based and not suggested for the egg allergic. The yellow fever vaccine also is egg based. Yellow fever is still a major problem for people living in or traveling to tropical South America or Africa.

According to research from Johns Hopkins Children’s Center published in Science Daily in December 2007, milk and egg allergies now appear to be more persistent and harder to outgrow:

“In what are believed to be the largest studies to date of children with milk and egg allergies, researchers followed more than 800 patients with milk allergy and nearly 900 with egg allergy over 13 years, finding that, contrary to popular belief, most of these allergies persist well into the school years and beyond.

The bad news is that the prognosis for a child with a milk or egg allergy appears to be worse than it was 20 years ago, says lead investigator Robert Wood, M.D., head of Allergy & Immunology at Hopkins Children’s. Not only do more kids have allergies, but fewer of them outgrow their allergies, and those who do, do so later than before.

Researchers caution that their findings may reflect the fact that relatively more severe cases end up at Hopkins Children’s, but they believe there is a trend toward more severe, more persistent allergies.

The findings also give credence to what pediatricians have suspected for some time: More recently diagnosed food allergies, for still-unknown reasons, behave more unpredictably and more aggressively than cases diagnosed in the past. We may be dealing with a different kind of disease process than we did 20 years ago, Wood says. Why this is happening we just don’t know.

Earlier research suggested that three-quarters of children with milk allergy outgrew their condition by age 3, but the Johns Hopkins team found that just one-fifth of children in their studies outgrew their allergy by age 4, and only 42 percent outgrew it by age 8. By age 16, 79 percent were allergy-free.

The Hopkins Children’s team found that a child’s blood levels of milk and egg antibodies-the immune chemicals produced in response to allergens-were a reliable predictor of disease behavior: The higher the level of antibodies, the less likely it was that a child would outgrow the allergy any time soon. Pediatricians should use antibody test results when counseling parents about their child’s prognosis, researchers say.

One encouraging finding: Some children lost their allergies during adolescence, which is later than believed possible, suggesting that doctors should continue to test patients well into early adulthood to check if they may have lost their allergies.

Milk and egg allergies are the two most common food allergies in the United States, affecting 3 percent and 2 percent of children, respectively.

Reports on the two studies appear in the November and December issues of the Journal of Allergy and Clinical Immunology. Co-investigators in the two studies: Justin Skripak, M.D., Jessica Savage, M. D., Elizabeth Matsui, M.D., M.H.S, Kim Mudd, R.N., all of Hopkins Children’s.

The studies were funded in part by the National Institutes of Health and supported by the Eudowood Foundation, the Food Allergy Initiative and Julie and Neil Reinhard. Wood is a consultant for Dey Pharmaceuticals and has received support from Merck and Genentech.”

Reading food labels will be a necessity for a child with egg allergy!

The Food Allergy Labeling Consumer Protection Act (FALCPA) was passed in 2004, requiring: labels to be marked such that a 7 year old could read and understand the ingredients, all allergens are declared even if they are in the spices or flavorings, and curtail the current widespread use of the ‘may contain statements.’ This act went into effect January 1, 2006.

There are other names that eggs can be called on food labels. Avoid any product with the “Ov” prefix listed as an ingredient, for example, Ovalbumin.

Some egg allergic children can consume eggs in baked goods, where the protein changes in the baking process. I wouldn’t suggest trying this…this food challenge has happened for some children purely by chance, and parents have determined their tolerance to baked goods. If your child has never had eggs, and is testing severely allergic to eggs, complete avoidance is the only cure!

There are substitutes for eggs in recipes.

For a product that you can purchase, try: Ener-G Egg Replacer.

Or you can use the following in recipes: