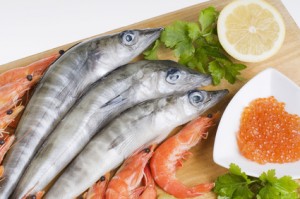 If your child has been diagnosed with a severe allergy to fish or shellfish, it is likely he/she will have the allergy for life. These allergies are frequently severe, and can come on even as an adult. I know an adult woman with a shellfish allergy who no longer gets hives if she eats shellfish; instead she becomes disoriented almost as if she were intoxicated.

Should your child have a shellfish allergy, be careful eating fried foods in a restaurant. The oil used to cook shrimp could also be used to cook fried chicken or French fries. A young woman allergic to shellfish had anaphylactic shock from this very exposure.

Also, at a Japanese restaurant, the chef will prepare a fish or shrimp dish followed by another dish on the same surface. If your child is allergic to fish or shellfish, make sure the surface is completely cleaned before your child’s meal is prepared to decrease the chance of cross-contact, or don’t eat there at all.

Our son, Morgan, has a fish and shellfish allergy (in addition to peanuts, tree nuts and sesame). He has learned to manage these through his teenage years and into college.

The fish allergy was studied by researchers at John Hopkins University. It was originally thought that a fish allergic person should stay away from all different kinds of fish. The researchers found that allergic individuals might be allergic to one kind of fish, and yet have no allergic reaction to another. The process of canning tuna or salmon sometimes changes the fish protein enough that fish-allergic individuals can tolerate these canned products.

Spoiled fish can contain histamine in the tissue of the fish. The reaction most individuals have to this spoiled fish mimics that of an allergic reaction: swelling, hives, wheezing, etc… Should you have a reaction such as this, and this is not your first exposure to fish, consider the possibility of spoiled fish. If this is yours or your child’s first exposure to fish, an allergy test for fish would be appropriate.

Surimi, a processed Alaskan pollack used for imitation crab or shrimp, doesn’t always contain shellfish. It usually contains fish, and is used in these imitation products. Read labels and be careful!

For the shellfish allergic, stay away from all shelled fish: crab, lobster, shrimp and snails.

Also mollusks (clams and oysters) should be avoided.

Vitamins such as Glucosamine Chondroitin are contraindicated for the shellfish allergic. Most brands will have a warning on their label.

Shellfish and fish allergy: dishes to look out for

Dishes to look out for include: paella, bouillabaisse, gumbo, frito misto (a mixed fried fish dish from the Mediterranean coast), and fruits de mer (seafood). Oriental food tends to contain lots of different kinds of fish, and chopped pieces can be difficult to spot.

Surimi (a processed seafood product) is usually made from white fish but may contain shellfish extract. Surimi can be present in processed foods such as pizza toppings.

Kedgeree is made with rice and fish.

Fish sauce is a common ingredient in the Far East. Terms to look out for are Nuoc Mam and Nam Pla.

Fish sauce can be made with shellfish as well as fish.

Patum Peperium (Gentleman’s Relish) is a spread made with anchovies.

Menhaden is a type of fish caught along the Atlantic coast. It is used in products such as vitamins, soap, lipstick, paint, insect spray, and waterproofing.

People with shellfish allergy are sometimes warned against iodine, an element present in a wide range of items including shellfish, seaweed, cleaning products, and X-ray dyes. However, iodine allergy is unrelated to shellfish allergy. The allergen present in shellfish is not iodine but muscle protein in the flesh.

Your allergist should be able to provide you with a complete listing of ingredients that may indicate shellfish and/or fish protein. There are always new products being created with newly processed ingredient names. If you don’t know the exact nature of the ingredient, don’t eat it!

There is a new bandage that was used on the battlefields in Iraq called a HemCon® Bandage that is made from the shells of shrimp. I queried our allergist as to the safety of this Bandage for the shellfish allergic, because the product is now being marketed to local EMTs across the USA. The response that our allergist received from the company is as follows:

There have been no known allergic reactions as a result of using the HemCon Bandage since distribution began in 2003 and there have been no adverse effects reported in over 500,000 bandages shipped.

I have heard from so many families where their child is the one kid who reacts to a product that isn’t supposed to cause trouble for people with their particular allergen. I’m going to definitely exercise caution with this bandage and ensure that I keep current as to what my local EMTs will be using on people with severe bleeding.