Many of you have read my son, Morgan’s, recent posts about studying abroad with food allergies. If you’ve missed them, please read them on his Morgan’s New Corner blog here and here.  He wrote extensively about the details of what it took for him to be able to study abroad safely. He will be traveling throughout Iceland, Spain, France, Italy & Greece in August; doing research in Copenhagen, Denmark in September, and studying at the University of Lancaster in Britain from October through December 18.

As a parent, it was difficult to wrap my head around him studying abroad when he first brought up the subject prior to leaving for college. At the University of Denver, approximately 70% of the students study abroad – generally in their junior year. There were seminars about studying abroad for parents to attend during the Parent portion of the Freshman Orientation Week. I sat through those discussions and wondered how we, my husband and I, would ever be able to support this endeavor! Yet we both agreed that this was an opportunity not to be missed, if it was possible. It was going to take plenty of preparation, but the good news was – Morgan would be doing that instead of me!!

Over the past 2 years of college, Morgan has shown more maturity in being able to handle the details of his medical care. He has also become far more organized, and took on looking into the schools abroad that could accommodate his needs for safe food. Since middle school, he has been responsible for ALWAYS carrying his EpiPen 2-Pak, which he does ALWAYS. He knows how to recognize an allergic reaction in himself, and how to teach others. He can also teach others how to administer his EpiPen. He has vast experience with traveling by himself, and in groups, and keeping himself safe.

Since he doesn’t speak a second language, we knew that he would need to have an English speaking country for his study abroad, and thankfully he agreed with that wholeheartedly. I remember speaking with a father at a Parent’s Weekend at DU who was telling me that his son went to Australia for study abroad and loved it. He then mentioned that his son has a peanut allergy. I commented that it was probably easier to manage his peanut allergy in an English speaking country. The Dad said that he’d never thought of that! For some parents of children with food allergies, there is a different level of vigilance than what we’ve practiced.

We have chosen the vigilant lifestyle, based upon Morgan’s past allergic reactions. I can’t imagine being cavalier about where Morgan chose to study. It was also important, however, that Morgan take responsibility for ALL parts of the study abroad. This included whether the college/university had classes that would fit into his major; whether he could find a living arrangement that would keep him safe; and which airline he would choose to fly to his various destinations.

There are so many pieces of this puzzle to put together, and we allowed him to be the Project Manager of this adventure. He learned about an app called Trello that he was using with another project at school. This became our go-to place for listing all the details of what needed to be done prior to his departure. He would list various items that he knew he needed to provide to get into the country; and I listed other items important to me. Together we made it happen, and I also had to quit micro-detailing him to death. At 20 years old, he had shown how responsible he was, and I needed to trust that whatever happens abroad is for his highest and best good. 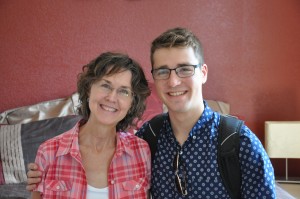 Yesterday, we took him to Denver International Airport. I couldn’t believe that we were at the launch point! The years of teaching him how to be safe with food allergies were going to get the biggest test yet. He has a written plan for the cities he will be visiting detailing where he’s staying, and he’s checked out various markets and restaurants. He’s going to purchase a SIM card in each of the countries he’s visiting to be able to communicate with us and with others. We will be communicating through Skype while he is abroad, however he told me to expect a weekly update – not daily! He will provide a map “touch point” every time he enters into a new city while traveling during August. This will allow us to know he has safely arrived. He also provided us with his detailed itinerary for the month of August, so we know where he’s planning on being. He’s traveling with two DU friends – one of whom flew with him. The other one, they will meet in France. 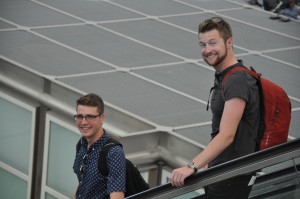 It’s not easy to allow our children to grow up and participate in college life! I cried many a tear yesterday, and hugged him three different times before he got on the escalator to head to TSA. I’m so excited for this adventure for him. And I’ve already counted the days until his return – 139 to go!

One thought on “Encouraging my Son to Study Abroad”