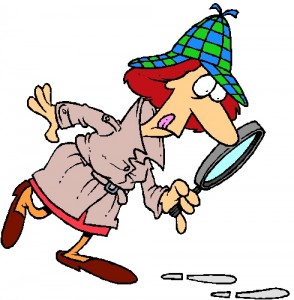 When my son, Morgan, was little we were constantly trying to figure out what caused his red, weeping eyes. Or his runny nose. Or his bad eczema. Or his hives. It was a daily battle in becoming what I now call a “Food Allergy Detective.”

Truly, it was frightening to not know why he was reacting when we went to the library, for example. We’d bring home several books. I’d look over at Morgan and he would be a mucousy mess. We never quite figured out that reaction for sure. It was probably a combination of the fact that the library had a “Paws to Read” program where they brought a dog into the library on a weekly basis to listen as kids read. Morgan had bad dog allergies, but at the time I didn’t understand that the dog hairs left behind could be enough to cause a reaction for him. It could have been the various pollens, dust, smoke, peanut dust and dander on the books themselves. Or it could have been something that we never thought about.

All one summer, Morgan had horrific eczema. We thought it must have been the sunscreen we were using. I continued to purchase new and different products in an attempt to find the mysterious cause. It took years to figure out that it was the ‘kid foods’ at the pool where we frequented. Kid foods have lots of food dyes in them. Turns out that Morgan got eczema from all food dyes. We found this out when we eliminated food dyes from his diet, at the suggestion of our allergist. So the Popsicles he was eating daily at the pool helped to exacerbate his eczema. What a relief it was to come to that realization!

After Morgan had an anaphylactic episode to fish on a camping trip, we thought we could still grill fish at home. We’d grill it outside our house on the deck, use a special grilling ‘cage’ for the fish, clean up scrupulously afterward – and all would be fine. This worked for a few months. Then, one morning we weren’t so lucky. We had eaten fish the night before, and Morgan had been fine. But the next morning, his eyes swelled shut and then began bulging. We dosed him with steroid eye drops, Benadryl and raced off to the allergist. Our doctor determined that Morgan had touched the fish that probably wasn’t cleaned entirely off the countertops or some surface inside our house. He had likely then wiped his eyes. That was a frightening experience! We determined then that it’s not worth eating fish even with preparing it outside on the grill. We just aren’t able to be careful enough to ensure his safety.

All this detective work has been necessary to try to have some control over Morgan’s environment. Ultimately it’s helped him to gauge whether a situation is safe for him. We talked through many situations with him as he was growing up to determine what might happen based upon past experience. He is one of the most sensitive food allergic children that I know. We learned though how to keep him safe. We’ve found that it’s REALLY necessary to have a safe home. It allows his immune system to be on ‘pause’ while he’s sleeping.

As for Mom here – I’m sure the local police force would appreciate my detective abilities. I’ve honed them well through the years!