Many of you may remember a previous interview I did with Lauren, a 14 year old high school girl who had a robot for high school because of her inhalant dairy allergy. If you haven’t read our blog post, INHALANT DAIRY ALLERGIES & A CREATIVE SOLUTION – A ROBOT! – you can do so here.

Lauren is now in college at the University of Northern Colorado, and I wanted to interview her, and her mother Melissa, about her experience through the rest of high school. Also, I wanted to see how she is managing in college without having a robot! 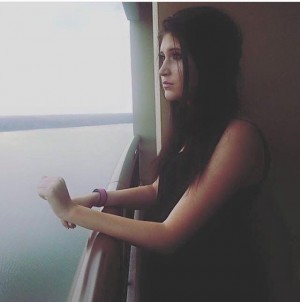 Lauren – you were 14 years old when we last interviewed you. How was the rest of high school for you with your dairy allergy? Did you continue to have a robot go to school for you?

The rest of high school was amazing! After using the V-go, my friend had told me about a charter school that was able to accommodate my food allergy. They even banned pizza, and implemented a desk cleaning before each class at the school for me! Everyone was so accepting of my allergy. I still stayed away from food areas and washed my hands often. Except for the occasional hives from dairy contamination, I had no severe reactions while I attended.

Were there any more instances of anaphylaxis during your years in high school?

Not while I was actually at the high school, but during the summer of my junior year I had a really bad one at a women’s retreat that I went to with my mom. There was a miscommunication with the staff that tried accommodating me in terms of food at the camp. I had accidentally eaten a piece of bread with dairy in it. It was a very scary ordeal, considering we were in the mountains & the response time up there is a little longer. I was scared and not sure what was going to happen but after 5 hours, 3 Epipens, 14 times trying to find a place for an IV, 2 Inter muscular injections, a breathing treatment, and lots of prayers the doctors stabilized me! Now I am much more careful and I always make sure my food is extra safe!

How did you prepare for going to college at the University of Northern Colorado?

I set up an appointment to meet with disability services at my school. They were absolutely phenomenal with working with us to make UNC a safe place for me to go. They got me an on campus house where I have a separate, safe apartment. I also took the time to talk to my professors about my allergy.

What made you choose UNC?

I chose UNC because I wanted to go away to college but I knew I really needed to be close to home in case I had a reaction. UNC was a perfect choice because it was only an hour away from my parent’s house. Additionally it had the major I was interested in. Plus, it’s awesome to see family and not have to cook your own food on the weekends!

What is your current living situation at school? How do you ensure that you don’t get near dairy?

I am in a house with a self-contained apartment on campus, I have other girls who live in the same house with me but they are on a totally different side. When I first moved in, I made them all aware of my anaphylaxis, and the severity of it. They are awesome and completely understand the seriousness of my allergy. Whenever I want to hangout in the main house, they make sure to not cook using dairy and they clean the house for me! Two of the girls are from Colorado and two are from Germany, and all have been so supportive and amazing to me, and they are actually some of my best friends now.

What are you planning on majoring in academically?

I am studying Audiology and Speech pathology and I love it! It’ll definitely be awesome to help people with hearing and balance issues one day as an Audiologist.

Have you been able to have a summer job? If so, what “food threats” have you run into with working?

In the past I have lifeguarded during the summer. It was actually a very good fit for me! I have never had a reaction at the pool, and I carry a protective mask in case I ever have to perform CPR. I also talked to my boss about my situation and I let her know that my safety is just as important as the patrons I am guarding, since in order to keep them safe I have to keep myself safe. During my time guarding, there were food parties but I didn’t have to worry about it because the guests couldn’t bring the food near or in the pool. It was definitely an awesome job!

Melissa – when we last interviewed you, Lauren was participating in Dr. Li’s Traditional Chinese Medicine (TCM). Did this treatment help Lauren at all?

Lauren is still taking the herbs. When we started the herbs we simply wanted her to be able to go inside school or the grocery store without having a severe reaction, since there was a time before the treatment that it became impossible to be inside places where food was being warmed up because her body seemed to be even more hyper sensitive then usual. We think this treatment might have helped, since (unlike before the herbs) she has been able to be inside schools, food establishments and other public places without her throat immediately closing. She has no reaction when we simply walk past a pizza place anymore (where as before she would react)

Still, if the dairy is being cooked close enough, she does still react. But at least we are headed in the right direction.

What accommodations did you and Lauren request for her in college?

We asked for them to find a place for her that would be safe from dairy. This was quite the challenge, since we live in a dairy filled world. They came up with a self-contained apartment on campus. Separate from the rest of the house. She is able to cook for herself & steers clear of any areas where pizza or food is served. This has been enough to keep her safe at school.

It was very difficult for me to pass the baton of “health watch” over to my son when he went to college. How have you been able to do that with Lauren’s severe dairy allergy?

Passing the “health watch” baton over to Lauren has to be one of the scariest experiences that we STILL struggle with daily. The good news is that since she’s been gone, she has proven herself to be a good self advocate in keeping herself safe. She did have two anaphylactic episodes since she’s been away (one could have been avoided with better diligence but the other could not) Lauren was in fact able to treat herself immediately with her epinephrine and called 911 for help. Her fast response is always critical in her outcome, and she is well aware of that, she also knows that her body keeps needing more epinephrine after the first one or two shots wear off. For me the scary part lies with the ambulance, and hospital personnel, who seem unaware sometimes how fast her reactions or biphasic reactions change in the blink of an eye. It’s paralyzing for us to think about “what if’s” So this is when we had to put our trust in Lauren & ask God to take over, so we wouldn’t lock her inside our house and never let her out.

Thank you Melissa & Lauren for inspiring hope in all of us!