There will be 3 epinephrine autoinjectors on the market effective February 14, 2017: the EpiPen, Adrenaclick and the Auvi-Q. All three devices are available in a Junior strength for children, and an adult strength.

Listed below are the pros and cons of each of these devices based upon my experience and upon the information available on their websites: 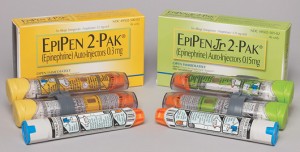 The EpiPen has been around since 1977, and owned by Mylan since 2007. There has only been one recall that I’m aware of, which was in 1998 when Meridian Medical Technologies manufactured the device. Almost 1 million devices were recalled since they weren’t providing effective doses of the medication.

The EpiPen training video states that the device needs to be held for 3 seconds after administration. 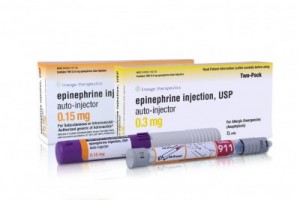 The Adrenaclick has been on the market since mid-2013. The training video states that it needs to be held for 10 seconds after administration. 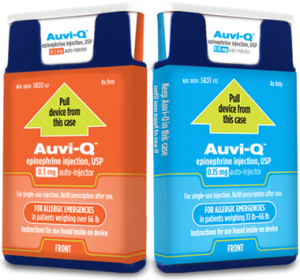 The Auvi-Q was originally manufactured by Sanofi, and was introduced in January of 2013. A recall of all devices occurred in October of 2015 when two dozen of the devices were suspected to have not administered the correct amount of medication. Sanofi no longer manufactures Auvi-Q. Instead Eric and Evan Edwards, the inventors of the Auvi-Q, brought the manufacturing back to their company, Kaleo Pharmaceuticals. Both Eric and Evan, and their children, have life threatening food allergies.

The Auvi-Q training video states that the device needs to be held for 5 seconds after use.