If you have a child with life threatening food allergies, I’m sure you know how stressful daily living can be and how difficult it is to keep your marriage healthy and happy in the middle of all that stress. My husband, Bob, and I wrote about the Emotional Aspects of Food Allergy on Marriage in a previous blog post here.

If you’re beyond the point of staying in your marriage, my interview with Elizabeth Goldenberg is below. Elizabeth Goldenberg is the Founder and President of Onespot Allergy, a blog and retail site dedicated to food allergy safety and legal issues since 2009. She is also President of EpiCenter Medical Inc, co-founded in 2012 with Toronto Allergist Dr. Mark Greenwald, which focuses on access to epinephrine and anaphylaxis first aid training. 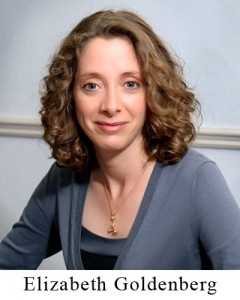 Hello Elizabeth. Not only are you a divorce attorney, but also the Founder of Onespot Allergy. Can you tell us a little information about both of these careers?
I’ve been a divorce lawyer for 20 years, and I’ve practiced as a sole practitioner for my entire career. I’m actually very well suited for that work and extremely effective at it. When my younger son with diagnosed with severe food allergies eight years ago, after I learned how to keep him safe, I had a business idea. I held onto that idea for several years, then finally gave myself permission to start Onespot Allergy. I know too many people who refused business opportunities because they were afraid to take a risk, and I didn’t want to be one of them. I now spend only 20% or my time practising law. In the new year, I may cut back my practice even more because I’ve partnered with a Toronto Allergist, and we’re launching two new allergy safety products.

What food allergies does your son have and how old is he?

I have two sons, Aaron and Jacob. Aaron has no food allergies, and Jacob is severely allergic to peanuts and tree nuts. Jacob is now ten years old, and he’s doing very well.

Not having ever experienced divorce, what issues are you seeing regarding children with food allergies when a divorce occurs?

I was consulted on only one case where a child’s anaphylactic food allergies were the main issue inhibiting access to the child by his father. In that case, the father wanted to take the child on extended trips and to family events, but he’d never learned how to choose or prepare safe food for his son, how to inform caterers and hosts of his son’s special dietary needs, how to avoid accidental exposure, or how to recognize anaphylaxis. He knew how to use an EpiPen, but without avoidance training and the ability to recognize anaphylaxis, that wasn’t satisfactory. During one anaphylactic episode that occurred while he was having access, he left the emergency department and drove his son home while the poor child was still unconscious. Understandably, the mother had deep concerns about his most recent request to travel with the child to attend a wedding and related events. She proposed to escort the child and attend to most of his needs while letting the child attend the events without her, but the father applied to Court, since he wanted his son to make the trip alone.

What can parents who are divorcing do better to take care of their food allergic child?

A certain amount of chaos develops upon separation, as each spouse adjusts to parenting alone. Sometimes the children’s needs aren’t taken care of as effectively, for example, notes from the school don’t get shown to both parents, homework or backpacks might be left at the other parent’s house when needed for school, and permission forms might not get signed. There’s just general confusion as the dust settles.

A child with food allergies can’t afford any mistakes to happen when it comes to his or her allergy management. As much attention as prior to separation needs to be given to his or her food safety, avoidance measures at home and at school, medical forms for the school, training of teachers to recognize and treat anaphylaxis, and having EpiPens always in reach. I recommend that children always wear two EpiPens or at least one in an EpiPen belt, rather than keeping them in a backpack or loose, since they can easily be left behind. That belt must stay on the child and move with the child between each parent’s home and school, since if it’s misplaced and a reaction occurs, there can be deadly consequences. Putting the allergic child’s needs first and staying completely focused on carrying them out during separation and divorce is the key.

In relation to custody issues do the courts view children with food allergies any differently than non-allergic children?

In my jurisdiction, custody and access decisions are based on the “best interests of the child.” You use the facts of a case to make arguments in support of your client’s position, and food allergies could definitely form part of your argument and influence a decision for custody or access to that child.

Having sole custody means that you have sole decision making power. Parents may not be able to make decisions together as joint custodial parents, if one parent is uneducated or negligent about food allergies. Access to a child can be completely unrestricted, have terms attached to it, or even be supervised. If a child were repeatedly exposed to his or her allergen by an access parent, you would want to attach terms to the Order. Examples would be providing that the child must only eat food supplied from the custodial parent’s home, that the child must be in the care of the access parent the entire time (no babysitters or only approved babysitters), that EpiPens must be kept with the child at all times, or that access occur only within a reasonable distance from a major medical center.

Have custody cases been decided based upon which parent understands food allergies better? Or which parent can provide a safer home?

Definitely. The case I described involving a trip for a family event was decided completely upon the father’s lack of understanding of food allergies, and his motion to the Court was unsuccessful. Every custody case is decided upon the child’s best interests, and an aspect of that is which parent can provide a safer home. The facts surrounding each parent’s food allergy management skills would be one factor to be considered.

How is ensuring that your child’s food allergies are properly managed by your ex-spouse different from going to the extreme and being accused of Parental Alienation Syndrome?

Typically for any serious allegation affecting custody or access, like allergy negligence or excessive drinking, the spouse would have documented concerns from prior to separation and there would be ongoing incidents after separation. I would ensure that anything you’re alleging is well documented, preferably by doctors, rather than relatives swearing supporting Affidavits. When there’s a clear trail like that to follow, rather than allegations arising only after separation, a parental alienation argument would not be successful. After so many years of divorce cases, I’ve never had a client accused of parental alienation, so it’s a stretch for me to imagine food allergy concerns being used to support that argument.

Is there anything else you would like to add?

I want to thank you for this opportunity to weave my legal experience into my work as an allergy advocate. I thought my career was taking a 180 degree turn from law when I started Onespot Allergy, and it’s lovely to contribute where law and allergy intersect, bringing my passion for allergy safety full circle into my work as a lawyer.

4 thoughts on “Marriage, Divorce and Children with Food Allergies”