If you’re like me you’re prepared for an ER visit for an accidental food allergy exposure – even if you hope it never happens! However, when there’s an ER visit for a non-food allergy related event, different issues can come up in the hospital, and it’s vitally important for our grown children to know medical details about themselves. We learned and confirmed this firsthand this past weekend. 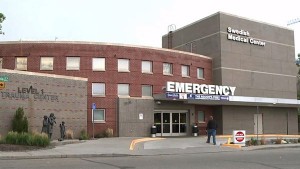 My college age son is working and living in Denver this summer. He awoke last Saturday morning feeling like he was catching a cold. Within a few hours, this turned into severe stomach pains above and around his navel, especially on the lower right side. After 7 hours of feeling worse and worse, with oncoming rounds of nausea, he called my husband and I via Facebook messenger (more on that detail below!) We went through the usual questions of “did you eat anything new?” and “what are your symptoms?”

After listening to his complaints and the severity, we were concerned about an appendicitis or a gallbladder attack (since gallbladder removal is common in my family). He hadn’t eaten anything new, and didn’t feel like he was dealing with anaphylaxis presenting itself differently. We felt he needed to get to the ER to be seen by a doctor and to have tests run. We have learned to not mess around with medical issues with Morgan, with his past history of anaphylaxis and other illnesses in college.

After learning that he was alone in his apartment – all 3 roommates were out of town – we needed to figure out what to do at 8pm on a Saturday evening to get him to be seen by a doctor. He was feeling so awful that he didn’t feel like he could drive, and  didn’t want to wait an hour for us to drive to Denver to pick him up. After several text messages, he was able to find a friend in Denver willing to come pick him up and take him to the ER at Swedish Medical Center, which is less than 2 miles from his apartment.

His phone battery had been ceasing to stay charged, along with the phone having a shattered screen, so everything was being coordinated on an iPad with no data plan utilizing Facebook messenger on wifi, and texting, with no “regular” phone voice communication . Oy!

Morgan was picked up by his friend within 10 minutes, and we jumped in the car for the one hour drive to Denver. Thankfully that late at night there was less traffic. The same route during the day could take twice as long, and believe me every minute feels like an hour when you’re trying to get to your child in the ER.

Once we arrived, Morgan had already met with the physician’s assistant, reviewed his food allergies, and explained that he has had adverse reactions to pain meds (vomiting) when she offered him some pain relief. The PA ordered a blood draw, an IV saline drip, and a CT scan of his abdomen. When she heard that Morgan was allergic to shellfish, she wanted to ensure that the iodine dye in the CT scan was going to be safe. (Note: this is an old allergy myth that those allergic to shellfish will be allergic to iodine. The proteins are not the same, and therefore there is no risk. However, you can be allergic to iodine, and those with mast cell issues can have severe reactions to contrast dyes.)

We were very impressed with the thoroughness of Swedish Medical staff – physician, physician’s assistant and registered nurse – and their attention to the details of Morgan’s allergies and allergy history. I’d rather they be extra cautious about his food allergies than to blow past the long list of food allergies that he has (peanuts, tree nuts, sesame, fish and shellfish). They also listened to his history of pain medication issues, and honored his wishes to not take any of these medications.

This was the first time that he’s been over 21 years old at an ER. My husband and I were basically observers. All forms were signed by him, and all medical questions were answered by him. Of course, the required copayment was paid by us, since as a student, he is still on our insurance!

It took only a little over 90 minutes from the time he entered the ER to receive results of the blood tests and CT scan. Very impressive for a Saturday night! The CT scan showed no stones in the gallbladder, and the appendix appeared to be fine. Therefore, the stomach cramps could be from the virus he had, from an ulcer, or the start of some issue much larger – like the gallbladder or appendix – and it was too early for them to see anything on the scan. Who knows exactly what it could have been, in other words!

We rang in Father’s Day at midnight waiting for a little medication to be delivered. The IV saline drip was definitely helping Morgan feel better, even though he didn’t believe he was dehydrated. The doctor gave him a ” digestive cocktail” of Pepcid, Maalox, Lidocaine and Benadryl, which tasted awful but helped the stomach and intestinal cramping tremendously. He also walked out of the ER with prescriptions for more Pepcid and Zofran, an anti-nausea drug.

One of Morgan’s roommates had arrived back at their apartment while he was at the ER and was willing to be ‘on call’ should anything happen overnight necessitating assistance. As a Mom, this was a hard one – to let him go back to his apartment instead of coming home with his Dad and me. He’s a young man now, and he believed this was the best choice for him.

At the time of this writing, he is feeling much better and we’ve chalked up the ER visit to “who knows”! We’re very grateful Morgan knew to not wait until the middle of the night to ask for help. And we’re also grateful for the staff at Swedish Medical who treated him with utmost care and respect toward his food allergies and his wishes.

It is vital for our children with food allergies to know the details of their food allergies and medical history. I’ve written a blog post here about what we ensured Morgan knew before he went to college. Morgan’s previous issues with pain medications aren’t considered an allergy, but they are definitely pertinent for him to share with a doctor.

My husband and I enjoyed a traffic-free drive home to Colorado Springs in the early morning hours of Father’s Day grateful that no surgery is in Morgan’s immediate future. And hoping that he gets his phone fixed this week!