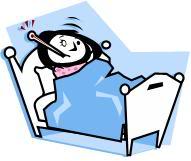 Our son, Morgan, had a great first week of Orientation at the University of Denver (DU). Then, on the first day of classes, he began to get sick – really sick! He continued to have a fever and chills for two days. He knew to start up his Pulmicort inhaler immediately. We discussed the breathing difficulties the Enterovirus 68 creates for children and teens sending them to the ER and Intensive Care. Yet Morgan didn’t have any classic cold symptoms – no runny nose, no sneezing, and only a mild sore throat.

After two days of feeling awful, and missing a few classes in order to sleep, he called me, aka Mom. At that point, I suggested that he go to the Health Clinic on campus; however, it was almost 7 pm and the Clinic was closed. So, we talked and he decided to go to a local Urgent Care. He was feeling so poorly that he asked his roommate to drive him. The wait was over an hour, and the doctor didn’t know what he had. The strep test came back negative, and sadly even if Morgan has strep, the test always come back negative. The doctor prescribed a very strong antibiotic for him to take to kill off any bacteria in his system. He took the antibiotic, and then was up during the night vomiting it back up.

By the next morning, he was feeling so awful, that we talked about him coming home to see our family doctor that has known him his whole life. Once he got into this doctor’s office, his fever was almost 103. He had vomited during the drive home from college, and again in the doctor’s office after another strep test – which also turned out to be negative . Blood was taken to ensure he didn’t have mono, but it would likely come back negative because Morgan didn’t have symptoms long enough for the test to be accurate. The doctor gave him a antibiotic specific to kill off strep.

We also took Morgan to a chiropractor that our family has been seeing who utilizes Network Spinal Analysis (NSA) and Somato Respiratory Integration (SRI) in her practice. She is amazing when it comes to diagnosing the underlying issues that occur with our bodies – and not only the spine, but all illnesses. She determined that Morgan had a bacterial infection just by the way his liver was reacting. She gave him a treatment, plus had him soak his feet in a foot back with herbs. Between this treatment, and the antibiotic, Morgan was feeling much better the next day.

One day later, however, he broke out in a rash that covered his face, torso and chest. Morgan called back in to the family doctor, who thought it must be some type of virus, and the doctor suggested that he stop taking the antibiotic! In other words, he didn’t know what Morgan had either. Morgan has continued to get better, and has also continued to take the antibiotic.

I wanted to write a post about this because part of sending our children with food allergies off to college is the “hope” that they can take care of their own medical needs, or find a doctor that can assist. In addition to monitoring their food, training others on their EpiPen or Auvi-Q, and if they have asthma, being able to monitor that – they also need to know how to manage the current healthcare system! It’s a lot to take on at 18 years old. And it’s something to consider when sending your child with food allergies off to college where they go far away.

What would you do if your child got REALLY sick and they are 2000 miles away? We were really grateful that Morgan is only 60 miles away, and that we could pick him up and bring him home to see doctors who know him well. We also wanted to see him ourselves to determine just how sick he really was. He was home for 2 1/2 days, and slept most of the time. We took him back to school when he still had a rash, but was feeling much better.

What can you do to make sure that your child is ready to manage doctors in our healthcare system while away at college? Well, here’s what we did long before Morgan left for DU:

1)  Have your child fill out all the doctor office’s paperwork each time you go in. We started this when Morgan was about 12 years old. Name, address, phone number is the basics!

2)  Review with your child what medications they take, what time they take them and what strength. Every time Morgan visited the allergist, he had to write this down on the intake paperwork. It helped him to know exactly what meds he takes. He was very adept at this by high school age.

4)  Get a health insurance card for your child to keep in their wallet. When you go into a doctor’s office with your child, have them present the card. Your child needs to know if they will have to pay a copay or not. Who is responsible for the bill? Is it Mom or Dad that holds the insurance? All of these details are vital when they go off to college.

5)  Decide who is going to ensure that medications that are taken get refills in a timely fashion (parents or student). Some insurance companies require that refills are obtained through mail order only. Which address do you want to use – home or college? Who is going to pay?

Thankfully, Morgan knew what to do when he was sick, and he also knew when it was more than just a mild sickness and time to call home. We’re grateful that he learned what to do before he left home, and we’re especially grateful that he’s feeling almost back to normal now!