For those of us with children with food allergies, awakening in the middle of the night worrying about cupcakes isn’t that unusual! Of course, if you share that concern with your neighbors who don’t have to worry about unsafe food, they may not understand. Food allergy parents understand all too well!

My son started college in September, so I was surprised to find myself awake at 2 am one night recently worrying about our son, Morgan. We had worked really hard to create a safe eating experience for him in the dorm cafeteria, and it was working great. His roommate was more than understanding about not bringing in Morgan’s allergens into the dorm room. Everything was working well – why was I worrying?

Morgan was heading off on a weekend trip with his leadership class. Prior to him leaving for college, we had talked with the coordinator of the leadership class, and the fact that there would be an overnight trip to a cabin in the mountains. It was the night before this particular trip that I found myself awake concerned if he had contacted the chefs like the coordinator had said he could. I was more concerned that he was also bringing along his 2 extra EpiPens (he always carries 2 in his pocket, but I wanted to ensure he was going to be extra cautious)!

So I lay there wondering if Morgan would think I was crazy if I sent him a text at 2am asking him to please remember his 2 extra EpiPens. After 30 minutes, I no longer cared what he thought and went to find my phone to fire off a text to him. Funny thing – he wasn’t up in the middle of the night worried like I was!! In fact, he had already handled the conversation with the chefs and had packed the extra EpiPens – as per his text back to me at 7 am.

No matter what his age, and how many times he has taken care of himself – I’m still a Mom. After 18 years of monitoring his food, his environs and his safety, it’s very difficult to let go and allow Morgan to take the baton and manage his food allergies himself. He’s doing a great job! 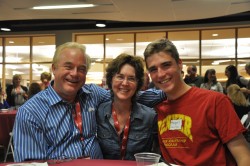