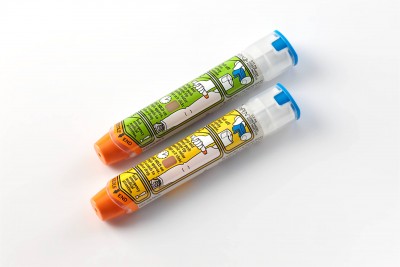 If your child has food allergies, it is vital that they begin, at a young age, to remember to bring their epinephrine autoinjector everywhere!

I had a conversation recently with a Food Allergy Mom whose 18 year old son is no longer remembering to bring his EpiPen with him when he leaves the house. She asked me what could she do? It brought up an interesting conversation about food allergies, safety and teenager’s brains.

Our son, Morgan, is extremely good about remembering his EpiPen. I think there are a few reasons for that:

1.  Morgan well remembers his last anaphylactic reaction to fish when he was 10 years old. If your child was an infant when he experienced anaphylaxis, he may not remember what it felt like to have a severe allergic reaction. He may discount the likelihood of experiencing any type of reaction, especially if he says, “I’m not eating, so there’s no need to carry it.” Which leads us to the next reason…

2.  Our family has specific safety rules. One of those rules is that he always carries his EpiPen on his person. We also have rules that require him to wear a helmet when biking, and wear a seat belt when riding in a car. If you stick with these rules, it’s easier for it to become a habit.

3.  Morgan started carrying his EpiPen in a fanny pack when he was 4 years old. He got accustomed to being responsible for it. He wasn’t allowed to carry it at school until he was in 5th grade per the Colorado law. Once he was allowed to wear it in school, we checked each day that he had it on his belt loop. For a while he carried one EpiPen in a flashlight holder on his belt. Now, he carries two EpiPens in a Garmin GPS pack inside his pants pocket.

4.  Morgan developed a system of stacking the items he needs each day. He stacks his cell phone, wallet and EpiPen pack on his desk so he always knows where they are when he’s preparing to leave the house.

5.  We were willing to turn around and go home to pick up his EpiPens should they have been forgotten. That showed him how important they are. Also, when he first began to travel with his Speech/Debate team, I would ask for a gift: please show me that you have your EpiPens. It allowed me to stay a little calmer knowing that regardless of what occurred during his trip – at least he had his EpiPens!

6.  My husband and I recognize that forgetting things is part of the teenage brain. He isn’t mature enough to realize the consequences of his actions. Therefore, it’s our job as parents to not allow him to engage in such risky activities where the consequence for his action far outweighs the oversight. In other words, if Morgan is caught speeding while driving, he will get a ticket. That is a reasonable consequence. If he forget his EpiPen, that could have life altering consequences. That’s too much of a consequence for a seemingly mild oversight. If Morgan wasn’t willing to carry his EpiPen, or was consistently/purposefully forgetting them, we would curtail his activities until he could prove he was responsible enough to properly care for himself.

As Morgan prepares to go to college, we have asked him to be completely responsible for all of his medications. Remembering to take his asthma medications daily will be vital for him to remain healthy at school. We still have about 6 more months to ingrain this in him! It is a process, but when moving out is tied to performing certain responsibilities, it’s amazing how remembering medications can become a priority.