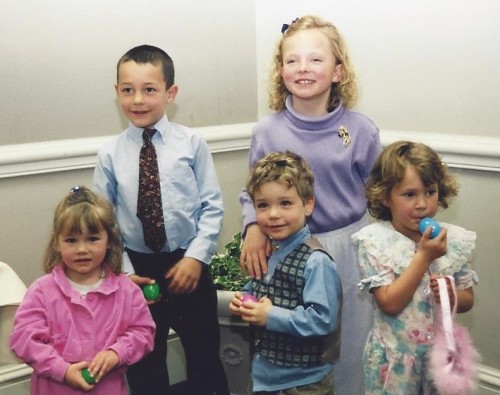 With the Easter holiday coming soon, the topic of food allergies and buffets is surely to be on any food allergy family’s mind!

The picture above was taken when Morgan was 3 years old, and we ate out for the first time at a buffet for Easter. We really weren’t thinking of all the issues that could occur! Have you ever done something that is so risky and only realized it afterward? Well, that’s how that Easter meal was for us.

We looked around at all the food and determined what was safe for Morgan to eat by asking a few questions like, “Does this food contain peanuts?” Then we served it up for him to eat. We didn’t think about whether the serving utensil had been used to serve other foods. Or whether the food service employee even knew whether the food contained peanuts or not!

There was an abundance of shrimp, crab and lobster being served at that buffet – all on Morgan’s severe allergy list at that time. We just steered him clear of that area, but many family members ate that food.

Despite all of our risky behavior, Morgan had no reaction. However, we learned later that we were lucky. Since then, we have not eaten at a buffet at either a restaurant or at someone’s house.

We have learned the following about buffets:

If there is anything along the buffet line that contains your child’s allergen – it could also end up in foods that are safe for your child. Serving utensils are frequently shared!

Asking a chef for the details about the food ingredients and preparation is the only way to know what is in a food. We have found that buffet foods are frequently made by an army of individuals in hotels, for example. One employee is very unlikely to know everything about every buffet food item.

If your family members want to eat at a restaurant buffet for a special occasion, bring a safe meal for your child!

When eating at a buffet at someone’s home, we allow Morgan to serve his food first only from what we have cooked and brought ! We have never felt comfortable with him eating food that other people have prepared, no matter how well-meaning they are.

We recently attended a luncheon at a local university that was hosting scholarship interviewees and their parents. Morgan had emailed ahead of time to request a meal accommodation free of his allergens – peanuts, tree nuts, sesame, fish and shellfish. He never heard back from the kitchen staff about his request. Therefore, he asked me to bring him a safe lunch since he was interviewing all morning and didn’t want to bring a lunchbox to the interview!

As we entered the luncheon hall, the buffet appeared to have mostly safe foods for all of his allergens. There was salad, bread, spaghetti noodles, meatballs and vegetables. Morgan asked the kitchen manager about his safe meal request. Her response was, “Oh you wanted the nut free meal.” Well, that wasn’t the only allergen, but that was a place to start! She asked another employee to advise Morgan about what was safe for him to eat.