When our now 17 year old son, Morgan, was very young, I never signed him up for day camps, and I never allowed him to sleep overnight at a camp for fear of the food involved. As he aged, he began to want to participate in these activities. He also had more of an ability to monitor the food and to determine if an activity was safe for him as he got older.

Day camps frequently are run by volunteers and/or high school age kids in our area. These types of camps include art lessons, church camps, Cub Scout day camp and music camps. We have found this to be a hazardous situation in most cases unless my husband or I participate. There are many wonderful activities in which to participate during a 4-hour or 8-hour day camp, however most volunteers are unaware of how to manage children with severe food allergies and possible allergic reactions. And during that time period, lunch or snacks will inevitably be served.

Having the ability to explain food allergies the day one arrives at a camp and teach every adult how to administer an EpiPen® isn’t likely to occur. We’ve found it virtually impossible to prepare in advance for these day camps, since the volunteers show up only on the very day of the event. We therefore participated as Den Leaders for Cub Scouts, or as an adult volunteer with any of these activities. That afforded us the opportunity to monitor the food, which allowed our son to be a participant.

Day camps hosted by a local school district or college have been very positive for us. I have completed the necessary paperwork to sign Morgan up for camp adding a copy of his Health Care Plan and 504 Plan and asking that the person in charge contact me. Then, I have gone to the location to train one or numerous individuals how to operate his EpiPen® prior to the first day of class. We’ve then had the opportunity to discuss necessary accommodations, and what to do in case of emergency. Morgan has participated in numerous of these types of camps, and has never had an allergic reaction. I think the difference between these day camps and the previously mentioned ones is that there is a qualified teacher in charge!

As Morgan aged, day camps geared toward a sport such as golf have proven to work well. One of the reasons this did work so well is that the golf pro and assistants never changed. We could train all of them how to use the EpiPen® on the first day of camp, and feel comfortable that no new faces would be teaching golf by the end of the week.

One summer, Morgan volunteered as a swim instructor at a local pool. He was in the water for 1 ½ hours per day with the 3-6 year old kids helping them learn to swim. There wasn’t any issue with food at all, since there’s no food in the water! We do choose his activities carefully, yet as a teenager he’s so much more able to monitor the food that does appear. 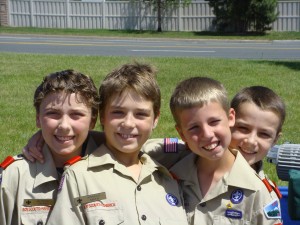 In regard to overnight camps, we’ve had very good luck. My son has gone for a week to the local YMCA camp and for a week to a Boy Scout Camp with much preparation beforehand. He even attended the Boy Scout National Jamboree in the summer of 2010 for a total of 17 days! These camps are more likely to have medical personnel on staff, and are manned by paid employees. There are medical forms to be completed prior to camp. We can list all his food allergies and the daily medications required to keep him properly medicated.

We specifically include EVERY medication that he might need or will need during camp, and we send all of those with him with a written explanation of doses and possible reactions. Our son has to remember to go to the nurse’s station to receive the medication, and he is old enough and responsible enough to do such. If your child is likely to forget their medication, some camps are better than others in reminding campers to take their meds. A really good camp will have a system for kids to be reminded without unnecessarily drawing attention to them.

The YMCA camp called it the “Secret Service” which was the cue for all kids who needed to take meds to head to the nurse’s office. This was a very nice way to keep medications discreet and keep campers properly medicated.

To prepare for overnight camp, I spoke with the EMT in charge of the YMCA camp a month prior to my son’s arrival. I described the medicines he would be bringing, and that he would also bring his own food. The EMT assured me that every camp counselor would know of my son’s allergies and also that they were all taught how to administer an EpiPen® should the need arise.

They served peanut butter only to those children who wouldn’t eat anything else, and it was carefully monitored at a separate table. My son had friends from school joining him for the week at camp who all understood his food allergies and all knew that no peanut butter could be eaten near him. They were a wonderful support, and exclaimed that the food brought from home looked better than the camp food!

Before choosing an overnight camp for your child, make sure that you and he/she are ready to take on this big step! Food allergies add that extra amount of precaution and potential worry that other first time campers don’t have to experience. It’s hard enough to sleep away from home for the first time, so worrying about food allergic reactions shouldn’t be part of any potential upset. Morgan was ready to handle any situation that arose, and knew the safe adults he could speak with should a reaction occur.

Earlier this summer, Morgan stayed at Colorado State University in Pueblo for Boys State, a week long summer camp about government. He initiated the calls to the Camp Director and spoke with the Nurse on staff prior to going to camp about his medications and their awareness of anaphylaxis. He also called the Chef on duty to speak with her about the possibility of safe food. I listened in on that phone call just to ensure that everything from cross contamination to ingredient listings was covered. For the first time ever, he was able to eat the camp food! The President of the University has Celiac Disease and the awareness of the kitchen staff was amazing about food allergies. Morgan learned the right questions to ask, and how to prepare for camp – a skill he will need for the future!