I’m writing this sitting in Copenhagen, Denmark after traveling for 30 days through 11 cities in 5 countries. I started in Reykjavik, Iceland and ended in Athens, Greece and visited nearly everywhere in between.

This past month was fantastic. I cannot even begin to explain how much impact this last month has had upon me. I was a bit skeptical when everyone said “travel will change you in unimaginable ways.” Well, I can say with certainty, it does.

This past month has also re-affirmed a sincerely held belief: having food allergies doesn’t limit you from anything. After ordering food in dozens of restaurants across Spain & France, eating gelato from the best shops in Italy, and having authentic Greek food in central Athens, I know that food allergies are simply another part of traveling. 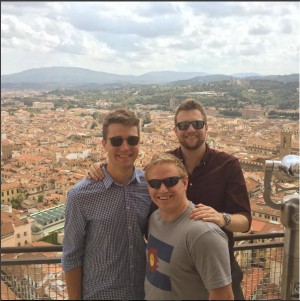 I traveled with Thomas (my first year roommate and best friend #1) and DK (best friend #2) for the month. They were absolutely hilarious to travel with and we had an absolute blast. Both Thomas and DK knew about my food allergies and were incredibly supportive and accommodating. They had been previously trained in how to use an EpiPen and were aware of cross contact issues. Most of the time, they were more worried about me being safe than I was!

It would take too much space to give a detailed play-by-play of each meal in each city, so I will give a review of where I went and what I saw and then move on to the important takeaways and lessons from this amazing travel experience.

Thomas & I flew out on August 1st and did a one-night stopover in Reykjavik, Iceland. It was our first city and it was a wonderful first stop. Even though we only had two full days in the city, we got to experience a very different city (in style and living) than most of Europe. If you have the chance, do a free stopover in Iceland with IcelandAir. They’re an excellent airline! We traveled via regional trains for the remainder of our journey.

We departed in Reykjavik and entered mainland Europe, beginning with Barcelona. We spent three days in Barcelona and got a real taste of what it’s like to live there (hint: most people wake up past noon and stay out late). We got to see La Sagrada Familia, a huge cathedral designed by Antoni Gaudí that is still under construction! It’s world famous. But we also ate at markets, got to see the Mediterranean, and walk around a really great city. 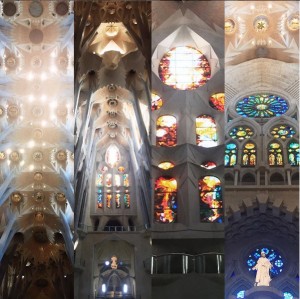 After Barcelona, we left to meet DK in Montpellier, France. With only one night, we only saw the main attractions: a cathedral, a large Arc de Triomphe and attached park, and the great medieval architecture. We got kicked out of our Airbnb (more on that later), so our time was cut a bit short. After Montpellier, we arrived in Marseille, France for two nights. We walked so much in Marseille, but we got see incredible views, churches, and history in France’s 2nd largest city. It was by far my favorite French city. After Marseille, we left for two nights in Nice, France — we mostly slept since we were recovering after Marseille and spent the rest of our day on the world famous beaches. As a note, there were armed French military patrols every 200 meters walking around the streets and along the beach due to their recent terrorist attacks. 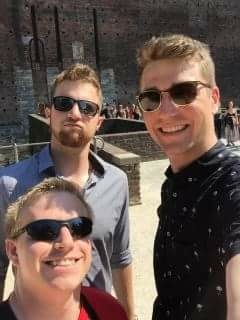 After Nice, we arrived in Milan, Italy after a brief 3-hour stopover in Genoa, Italy. We got to see the famous Il Duomo and three other incredibly historical churches, a medieval fortress, a museum, and ate world-famous pizza at Spontini Pizzeria. Our two nights in Milan felt really short but that’s mainly because we walked 12+ miles each day we were there! After Milan, DK went to see his cousin in Cinque Terre, a gorgeous coastal area of Northern Italy near Florence; Thomas and I went to Venice instead. Venice was by far my favorite city from the whole trip: picturesque canals, small shops and churches scattered all over the island, and a ton of history. We spent three nights in Venice.

We met back up with DK in Florence and spent a short three nights in Florence. Florence was the ideal “Tuscan” city: a giant cathedral (the Florence Duomo) surrounded by red tile roofs in a picture-worthy valley. We spent most of our time in art galleries and museums (the Uffizi and the Accademia, where Michaelangelo’s David is held). We could’ve easily spent a week in Florence, partly because we found the best gelato shop in all of Italy! 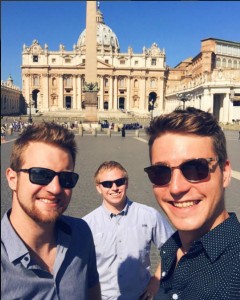 After Florence, we moved on to Rome. We spent a total of a week in Rome, but stayed in two different areas to add some variety. Our whole group got to see Pope Francis for his Sunday Angelus and now we can claim we have shirts blessed by the Pope! We also got to see all of the Vatican Museums and St. Peter’s Basilica, plus multiple museums and Roman historical sites. I ventured out to Tivoli, Italy by myself for a half-day in Villa D’Este, a 16th century villa with incredible gravity-operated fountains. After 7 days in Rome, we were definitely exhausted.

But no matter! We hopped on a short plane to Athens, Greece (via Aegean Air, another excellent airline) to conclude our trip. By this point, we were pretty darn tired so we split our days between relaxation and seeing historical sights. Still, we got to see a plethora of Ancient Greek history sites and museums. 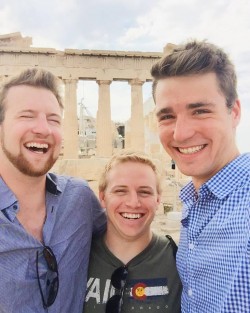 Upon reflection, Thomas and I realized we kind of moved “backwards” in history — Iceland was the “newest” country, founded in about 800 CE. And we moved all the way back to the cradle of Western civilization in Athens, Greece, which dates as early as 8,000 BCE. It was an incredible journey through history and through Europe!

I think there were a few moments that definitely top the list of “what the [heck] just happened?”

Obviously I had a couple run-ins with danger, but there were far more successes.

Those are some highlights (and I actually just realized while writing this that all of those moments were from Italy). Every waiter in Europe that I’ve explained my food allergies to completely gets it. They don’t ignore it and they double check with the kitchen on my meals. Really, truly good service even with a slight language barrier.

There was a lot I knew coming into my travels. I planned for months in advance for which cities we were visiting and where we were staying. I double checked airline policies for serving nuts (Iceland Air and Aegean Air are two fantastic airlines). I knew I would have to avoid chocolate at all costs because chocolate is usually made with nuts across Europe, and I would avoid it even if they told me their chocolate wasn’t. I even checked immigration restrictions on medicine and bringing EpiPens® into different countries.

But there’s so much I simply learned by traveling. In no particular order:

I could probably write pages and pages more — and I just might eventually! For now, those are the top takeaways.

After Greece, Thomas and DK left for Zurich, Switzerland to meet DK’s family. They’ll be finally settling down in Salzburg, Austria for their study abroad program in the next couple of days. I left for Copenhagen, Denmark where I am now completing a research project on small business performance and growth. 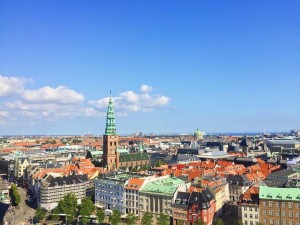 International travel can seem scary, I totally get that. I had a lot of fears about communicating with different people in different languages and still feel that the food served would be “safe.” But, it is entirely possible. You have to plan ahead, of course, but once you’re there, you have to figure it out somehow. If you explain you have food allergies, you may be surprised at how many people are willing to help and make sure the food is going to be safe and delicious. You can always figure a way to make it work!

Simply: Food allergies do not prevent you from doing anything in life, unless you let them.

Questions about travel or study abroad programs? Send me an e-mail at morgan@allergicchild.com. I’d be happy to answer any and all questions you have about my travels or about planning for yours!