Hi everyone! It’s Morgan. I’m currently researching small business growth in Denmark at the moment, but I decided to take a quick reprieve from my research and look into EpiPen® pricing here in this country.

The recent outrage over Mylan’s price increases certainly has made international news. Heather Bresch is now viewed as a challenger to Martin Shkreli as worst CEO of a pharmaceutical company, ever. Good.

Seeing all the news and congressional inquiries started to make me think: why does the US have this problem? Is it only a US issue? Why can Mylan get away with this blatant price gouging?

Doing a full cross-country comparison among developed countries in North America and Europe would take a few weeks, so I decided to examine how Denmark does it.

All Danish citizens qualify to be a part of the health care system and self-identify into two groups:

Denmark offers on-the-spot reimbursements for pharmaceutical costs (more on that later) and it doesn’t matter if you’re in Group 1 or 2.

Let’s say I’m the CEO of a pharmaceutical company. Let’s call this company Molfyne and say it mainly produces anti-depressants. Let’s also assume that I’m licensed by the Danish government to produce and sell pharmaceuticals in Denmark.

Molfyne would need to apply to the Danish Medicines Agency, a national agency, to have its drug recognized and sold in Denmark. I would need to file an application with the Danish Medicines Agency (DMA) and tell them my selling price of my drug to Danish pharmacies. I also submit documentation regarding the effectiveness, side-effects, and value-added of the drug (among other information) to DMA and wait for their response.

DMA determines whether the drug will be reimbursed or not based on those factors. It’s not entirely clear from my research whether DMA “negotiates” with my company over my price offered, but I suspect there might be a little negotiating.

Then, if approved, my anti-depressants are bought either by Denmark’s hospital drug procurement company (called Amgros) or by private wholesalers who sell to local pharmacies. If a patient is prescribed my drug in a hospital, there’s no co-pay or any payment since any and all pharmaceuticals are provided by the hospital and payed for by taxpayers.

If a patient is prescribed my drug by their GP or specialist and needs to buy it from a local pharmacy, they are reimbursed on-the-spot by the Danish government on a tiered system. This means that if a drug cost $50 and they qualified for a “$10 reimbursement,” they would only pay the pharmacy $40. This tiered reimbursement system is determined by how much you’ve spent on pharmaceuticals this calendar year. These tiers are 2015 numbers and are adjusted annually.

(DKK refers to the Danish Krone, their currency; $ is US Dollars)

To translate this, if I need to get $200 worth of drugs in February, I pay $138 out of pocket, and get 50% off the remaining $62. But if I need to buy $200 of drugs in June, I get the 50% reimbursement on the leftover of the second tier ($27 worth), and get a 75% reimbursement on the remaining cost. It means the more drugs you need to purchase, the less expensive it gets for you.

Denmark makes it really easy to find out how much drugs cost across the board: they even have a website (http://www.medicinpriser.dk/) you can explore. It is in Danish, but you can select “English” in the upper right to view it in English.

If you search “EpiPen” you get this screen: 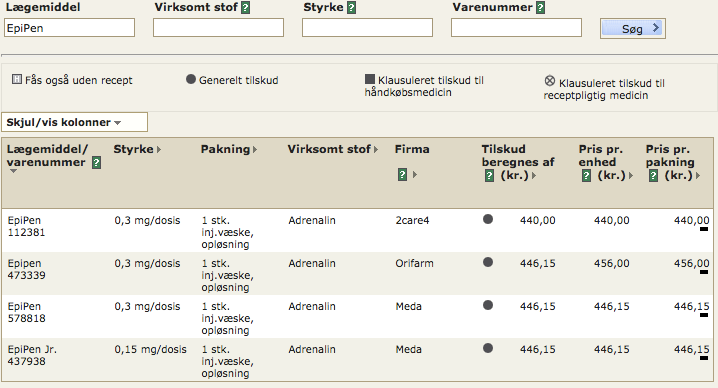 Notice that there are three items for 0.3 mg doses (the Stryrke column) from three pharmaceutical companies: 2care4, Orifarm, and Meda (the Firma column). Look at the consumer price (far right column)! 440 DKK is the equivalent of about $66. This means that you would pay $66 for an EpiPen® (a single one, not a two pack). The Meda EpiPen® costs 446.15 DKK, which is about $67. Really not much difference between the companies.

I was blown away seeing this. $66 for one EpiPen is cheap, even though it is an increase from previous years. Furthermore, if I have other drug costs from the year and need to get an EpiPen, this could cost me $33 (50% reimbursement), or ~$16 ($75% reimbursement). That’s quite inexpensive.

Lastly, drug companies are only allowed to adjust prices every other Monday, and they must be publicly recorded with the Danish government. There is also a law-binding agreement between an association of pharmaceutical companies (called Lif) and the Danish Ministry of Health to only raise drug prices ~1.5% every 4 years. Only some companies, like Sanofi and Pfizer, are a part of this association.

Obviously, this lower price for an EpiPen® is not happenstance. But, before we get to taxes, I’d like to note two important changes in the Danish system:

You pay 8% on all gross income — regular income, wages, pension benefits, and so forth. There are deductions for interest dividends up to about $7,000 a year.

Then, you pay the following national income taxes (2014 rates):

You also pay between 23% and 28% to your municipality (averaging about 24% across Denmark). They’re merging their national healthcare contribution tax (3% for 2016) into their national income taxes over the next few years, but you pay that too. In total, you could pay upwards of about 57% of your income to governments of various levels every year. That’s a lot of taxes.

Oh and there’s a 25% value-added tax (kind of like a sales tax) on all goods.

The Danish government provides a lot more than just universal healthcare in exchange for those taxes. There’s extensive unemployment insurance, social security, education (including higher education), job training, and vocation schools. Plus you get the “normal” benefits like paved roads and national security. This kind of system is referred to as the “Scandinavian welfare model.”

Lessons for the United States

Health care is a complicated system. There are pharmacies, health insurance companies, pharmaceutical companies, medical device manufacturers, hospitals, emergency providers, private practices, and so much more. Denmark decided to basically keep most of that private (only doctors at hospitals are “public employees”; most health care providers are private employees) but fund it all publicly. They figured out ways to keep regulatory compliance low and efficient.

It’s also important to note there are a lot of differences between the United States and Denmark. Geographic size, population, and regional inequalities all play a role. If you live in a rural region of Denmark, you’re going to get the same kind of schooling or access to health care as kids in Copenhagen — that’s not necessarily true of Mississippi versus Minnesota. Denmark is only 5 million people large; that’s barely the size of Colorado. And, of course, it’s a tiny maritime nation on the north end of Germany versus half of the North American continent.

Nonetheless, I think there a few key takeaways:

We need some serious healthcare reform. Most of it is going to be opposed because (from the Economist, again) “the only thing that Americans detest more than an expensive drug is a bureaucrat who says they can’t have it.” But, there are obvious lessons from countries around the world who have effectively dealt with price gouging by pharmaceutical companies like Mylan.