My last high school-related adventure involved traveling to Kansas City for the National Speech & Debate Tournament, an event I had qualified to attend earlier this year.

Before we left, I gave a health care plan to my Speech & Debate coach that explains procedure for an anaphylactic reaction, my allergies, and has an array of information on who to contact. I trained my friends/teammates on EpiPens as well.

We left Sunday morning from Denver International Airport, flying Frontier to Kansas City. Frontier does serve food, but you have to pay for it (i.e. there are no complimentary drinks or food for most passengers). I asked the stewardess the moment I got on the plane if they served peanuts, and she replied, “You can certainly buy them.” I quickly assured her I wasn’t going to buy them due to a peanut allergy. Since the flying arrangements for this trip were made by the school, all six of us traveling to Kansas City got to sit together. This was important since peanuts could still be served on the flight to someone who was interested in buying them; that issue was mitigated since I was sitting with my friends. 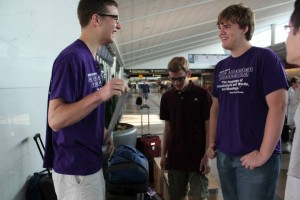 After arriving to the hotel, it was about 1:00pm (an hour ahead from Denver), and we were pretty hungry, so we walked across the street to Panera Bread. Panera is notable for its homemade bread that is mostly all cooked together. I talked with the manager about some safe options (it differs by store on how they cook their bread), and settled on a simple grilled cheese for lunch. I had a salad at Panera for dinner, probably the far safer option due to the possibility of cross contamination. Weighing the information given though, I decided that the grilled cheese was safe since it was not cooked with nut breads and they have rigorous cleaning procedures.

Speech & Debate tournaments occur in high schools, middle schools, and sometimes (at Nationals) in elementary schools. In Overland Park, Kansas (where we were), they had dozens of different schools for the thousands of competitors, each dedicated to a specific event (like solo debate or humorous interpretation). We had our coach and two parents joining us with rented cars so they could go and buy safe food for us.

Breakfast was served at the hotel and there was a McDonalds across the parking lot for variety. I found out I could eat McDonald’s breakfast items after my California trip (read about it here). Lunch and dinner varied by days and locations (if we were at a different high school, we might eat something different).

Story of the Week: Due to its fame, Jack Stack’s is always pretty busy. Instead of dining in, we went over to their takeout side of the restaurant. While waiting for our food to be ready, we got in a nice conversation with a man who was picking up his own BBQ meal. Very genuine guy, who was interested in Speech & Debate and our interests. Right before leaving, he actually gave our coach $200 to spend on dinner for another night!! (We used it at the Cinetopia because, while their tickets aren’t that much more than normal, their food is abhorrently expensive). It was a very kind gesture.

This was the longest trip that I’ve been through where we haven’t brought/planned food. I had combined a list of possibly safe restaurants before the trip began and sent it to my coach (it included Jimmy John’s, Jack Stack’s, Chipotle, and Applebee’s). That helped dictate a few choices, but we also got recommendations from the locals (for El Fogon and the Kolache Factory, for instance).

Here’s a few tips on dealing with new restaurants:

Nationals was one of the best experiences I have had – not only due to the intelligent and humorous people at the event, but also the safe food that was readily available. I also broke to Top 80 at Nationals in Lincoln-Douglas debate, a solo debate centered around values & ethics. 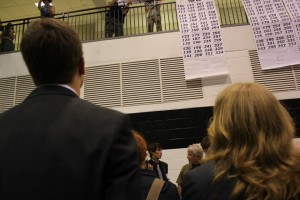 If you would like to view the National Tournament Highlight Video (published by the National Speech & Debate Association), click here. I make a cameo appearance at :49 (I’m in the background looking up. The camera isn’t focused on me). Plus, there’s a great music video at the end of it.